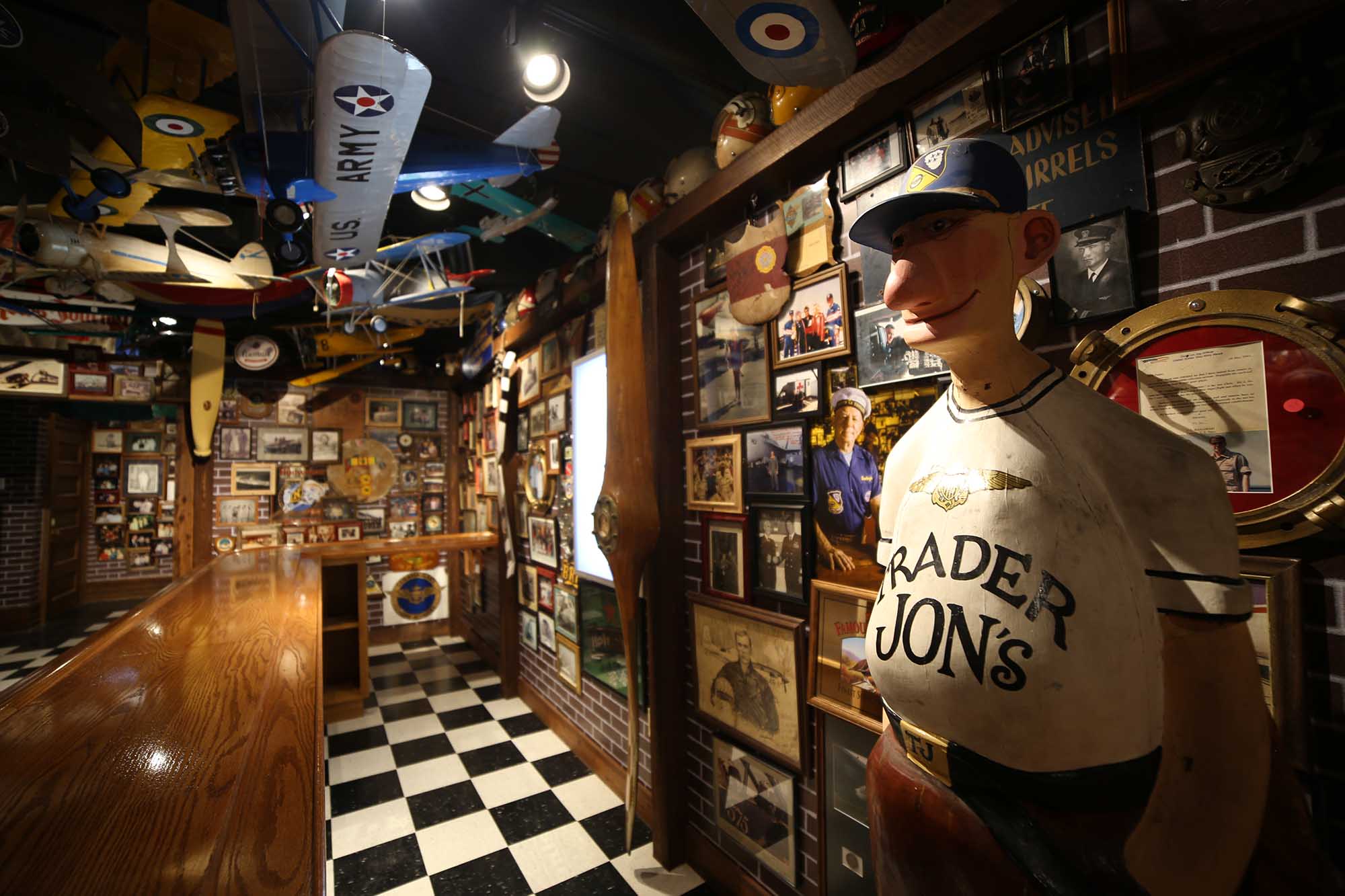 For decades, Trader Jon’s was the watering hole of choice for the U.S. Navy pilots who trained in Pensacola, known far and wide for the eccentricities of owner Martin “Trader Jon” Weissman and his massive collection of Navy memorabilia.

The iconic South Palafox Street bar closed in 1998, a year after Weissman suffered a debilitating stroke. Trader Jon’s briefly reopened under new ownership after Weissman died in 2000, but the bar closed its doors for good in 2003.

Now, a new exhibit opening Friday at Pensacola’s T.T. Wentworth, Jr. Florida State Museum has recreated the bar and showcased the memorabilia that’s been sitting in storage for more than a decade.

It’s a collection that Weissman assembled year after year, living up to his “Trader” moniker by swapping drinks for the photographs and relics that came to occupy every available square inch of the bar’s walls. Over time, the collection grew to include more than 10,000 items, including a Tailhook rhinoceros, a leather saddle that was gifted to Trader Jon by John Wayne (as the story goes, at least), a flight suit belonging to Bob Hope, and more.

Valued at $2 million, the collection was purchased by Pensacola lawfirm Aylstock, Witkin & Sasser and donated to the Naval Aviation Museum Foundation after the bar closed.

Visitors to the new exhibit will enter through Trader Jon’s original front door to find a replica bar, a miniaturized version of the bar’s “Blue Angels Museum” room, the model airplanes that once hung from the bar’s ceiling, flight suits, signed photos of celebrities, and more.

“We hope that this exhibit brings back fond memories for those who visited Trader Jon’s,” said Rob Overton, executive director of the UWF Historic Trust. “We also feel that Trader Jon’s was a memorial to our military and naval aviation in particular, and hope that this new exhibit will serve as one, too.”

“This exhibit is unique in that it will resonate not only with the local community, but also with those servicemembers who frequented Trader Jon’s while they were stationed in Pensacola and are now spread across the globe,” said Dr. Brendan Kelly, UWF’s vice president for University Advancement and CEO of the Historic Trust. “We wanted to give those who had the pleasure of visiting the real Trader Jon’s an opportunity to revisit history and allow those who didn’t to experience it for the first time.”

By all accounts, the only thing the exhibit won’t have is Trader Jon himself. Beloved by generations of Pensacolians and Naval aviators alike, Weissman was known for his trademark mismatched socks, reportedly offering a free drink to any customer who spotted him wearing matching ones. Drink prices weren’t always fixed, instead varying with Weissman’s mood and how well he knew a customer — a system regulars called “tradernomics.”

While Weissman won’t be there in person, Overton says the exhibit will feature video recordings of Trader Jon telling his legendary story.

“Trader Jon’s was a place where Naval Aviators went to relax, swap stories and enjoy each other’s company,” said U.S. Senator John McCain in 2005. “I cherish the memories of my time spent there.”

The Trader Jon’s exhibit opens to the public on Friday, October 28 at 10 a.m. Located at 330 South Jefferson Street in downtown Pensacola, the T.T. Wentworth, Jr. Florida State Museum is open Tuesdays and Wednesday from 10 a.m. to 4 p.m., Thursdays through Saturdays from 10 a.m. to 7 p.m. and on Sundays from noon to 4 p.m. To learn more about the Trader Jon’s exhibit and for museum hours and ticket pricing, visit historicpensacola.org.