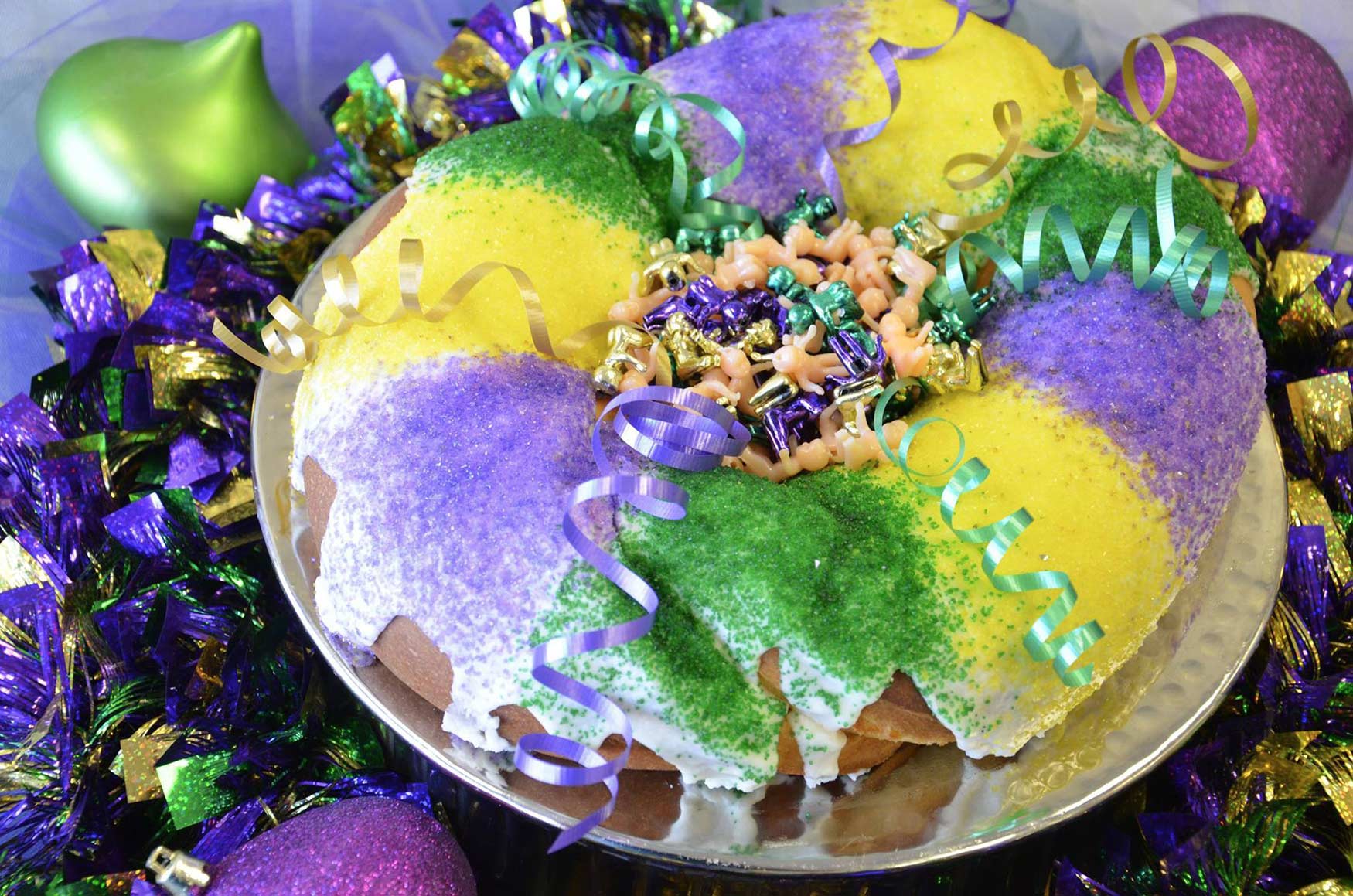 It’s officially Mardi Gras season, which means bakers along the Gulf Coast are churning out king cakes as fast as they can.

The uninitiated among you might be asking, “What’s a king cake?” Traditionally, king cakes are Danish pastry dough, braided with cinnamon and baked with in the shape of a hollow circle. Think of it almost as a giant donut-shaped cinnamon roll. They’re usually iced and often filled with cream cheese or fruit. And oh yeah — there’s usually a plastic baby inside the cake somewhere. Customarily, whomever finds the baby in his or her slice has to buy next year’s cake.

Here are the top 10 places to get your king cake fix along the Gulf Coast:

Haydel’s or Gambino’s — New Orleanians have been debating whose king cakes are better for as long as anyone can remember.

The legendary Haydel’s makes king cakes in a variety of flavors, and ships them around the world all year round.

This Metairie favorite bills itself as the “King of King Cakes,” and for good reason — Gambino’s sells as many as 100,000 king cakes each year.

Gambino’s cakes aren’t just filled, they’re stuffed — with everything from lemon or strawberry up to chocolate chip cookie dough.

Like Haydel’s, Gambino’s sells king cakes year round and ships them around the world.

The new kid on the block, Sucre is perhaps better known for its incredible macarons and to-die-for gelato. But if you’ve been to their Magazine Street storefront, you’ve probably seen their case of couture pastry creations and thought about how they look almost too pretty to eat.

Sucre’s king cakes are no different. These aren’t your run-of-the-mill grocery store king cakes. These are productions — buttery danish pastry dough sweetened with cinnamon and raw sugar before being folded with just the right amount of cream cheese, then iced with an edible glitter that produces a gorgeous luster. One size, one flavor only. Shipping available.

Paul’s Pastry Shop — located in tiny Picayune, Miss., about 45 minutes from New Orleans — bills itself as the first bakery to fill king cakes with cream cheese and fruit. Like the other stores we’ve mentioned so far, Paul’s ships its cakes year-round, so you don’t have to wait for carnival season to get a taste.

Paul’s king cakes are also available at markets and specialty shops throughout Mississippi and as far east as Gulf Shores, Ala.

Mobile is where Mardi Gras started on the Gulf Coast — and Pollman’s Bake Shop is the undisputed place to get a king cake in Mobile. The longtime Mobile favorite has been turning out king cakes since the 1950s, selling more than 10,000 cakes each season.

Fairhope’s Warehouse Bakery & Donuts does it a little differently, with donut-style king cakes. Braided dough is fried like a donut, glazed, and sprinkled. The cakes can also be made with a variety of fillings. Customers should call ahead for these, though — they’re not on the regular menu.

Most people know Oh Snap! for their cupcakes — but they’re one of Pensacola’s top spots for king cakes. The Cervantes Street bakery makes their king cakes in a variety of flavors, including traditional with brown sugar, cream cheese with brown sugar, strawberry, almond, and other fruit and chocolate flavors. “Whatever anyone wants, we can put in,” said owner Lee Newkirk.

Oh Snap’s king cakes come in two sizes with prices ranging from $16 to $32. They’re available in-store each day until supplies run out, but the shop recommends calling ahead to pre-order.

East Hill’s City Grocery doesn’t make its own cakes, but they do import the real deal from the New Orleans area. The folks behind the 12th Avenue deli and bar head west once a week to stock up on Party Palace king cakes from Kenner-based Party Palace.

OK, so this one’s cheating a little bit — but if you’re in the mood for king cake without, you know, the cake, Dolce & Gelato’s king cake gelato is a pretty good choice. They take a cinnamon vanilla gelato base and fold in chunks of king cake — icing and all. Also on the menu? Moon Pie gelato. Mmm.

Last — but certainly not least — is Rouse’s, the Louisiana-based grocery chain with stores as far east as Mobile, Spanish Fort, and Gulf Shores, Ala.

Rouse’s king cakes may not be the fanciest cakes you’ll find — but they’re delicious, come in a variety of flavors, and they’re among the most affordable on this list.