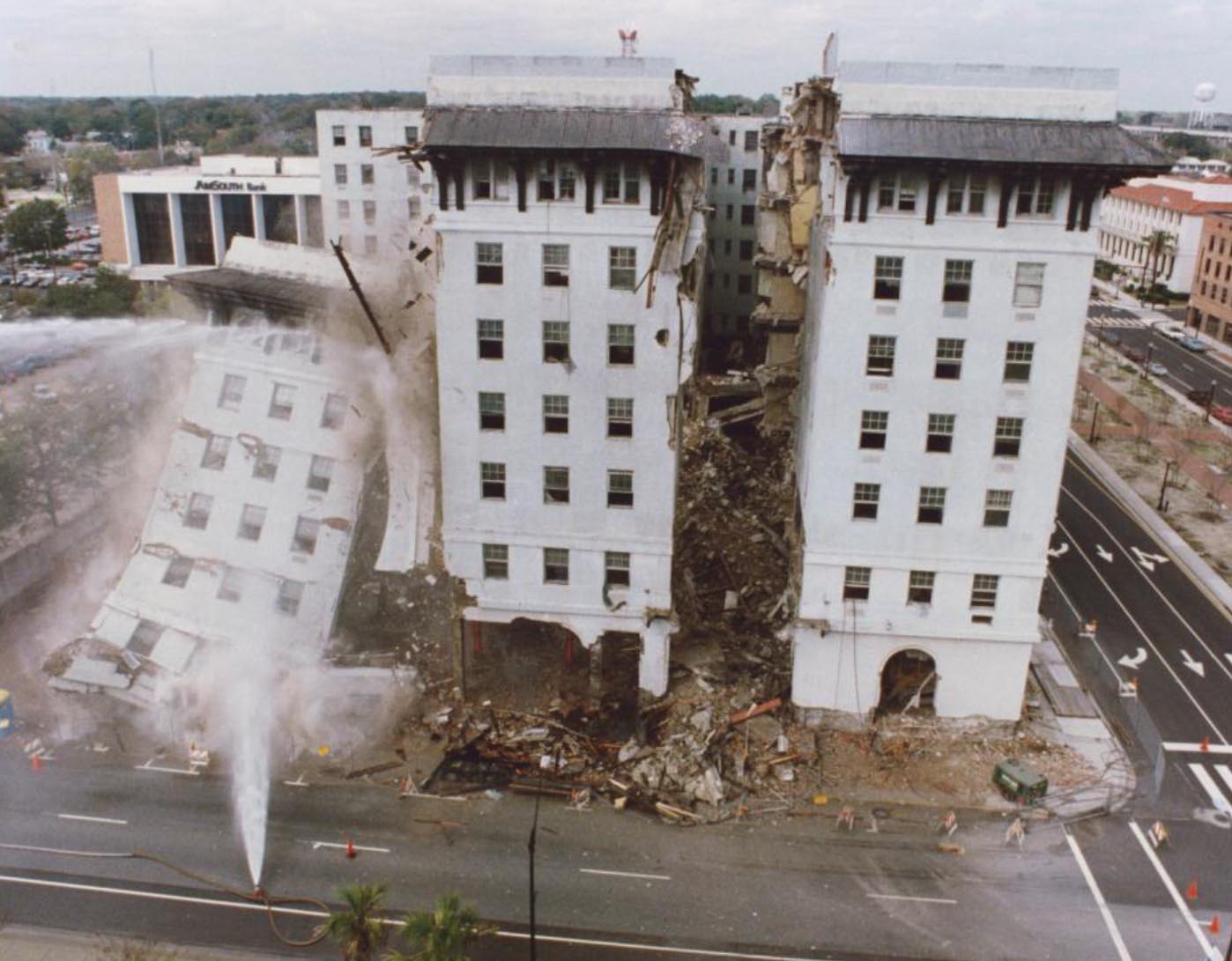 The old San Carlos Hotel, which disappeared from the Pensacola skyline 25 years ago, still has a nostalgic hold on Pensacolians young and old. Many still hold cherished memories of the famous hotel from honeymoons, vacations, proms, and parades.

But 25 years ago this week in 1993, a wrecking ball began making slow, but determined work of the famous hotel known by many as The Gray Lady of Palafox — forever losing the famed landmark to the annals of history.

Over the next few weeks, The Pulse will run a series of articles chronicling the history of the landmark — from its construction as one of the largest and most luxurious hotels in the American South during the first decade of the 20th century, to its gradual deterioration and inevitable demolition as a downtown faded into the shadow of suburban growth.

Today, downtown Pensacola couldn’t be more different from when the San Carlos was demolished. The boom of construction and growth today is reminiscent of the great lumber boom of the 1880s in Pensacola.

Back in its heyday, the San Carlos Hotel was one of Pensacola’s most visible and colorful landmarks — the social centerpiece of Pensacola.

Shortly before it opened on February 1, 1910, just in time for Mardi Gras, the Pensacola Journal featured the hotel on its front page with the headline: “Pensacola’s Magnificent Half-Million Dollar Hotel.”

Upon its opening, the hotel would play its role in attracting more than 10,000 people to the city — the largest ever — during Mardi Gras, as trains, ships, and wagons poured into Pensacola. Overnight, the hotel was a success and became a local landmark.

For generations of visitors and Pensacolians alike, the San Carlos became a constant throughout nearly a century of growth, decline, and change. For 83 years, she stood at the corner of Pensacola’s “heaviest corner,” flanked by her fellow landmarks such as the Blount Building, the Masonic Temple, and the Isis Theater.

But over the decades — through war and depression — the hotel’s allure eventually faded, thanks in large part due to the rise of the automobile and the destructive effects of suburban sprawl after World War II. Eventually, after being largely abandoned in the 1970s, the imposing structure would change ownership several times, deteriorate as a result of millions of dollars in deferred maintenance, and face multiple condemnation notices.

It was in 1993 — exactly 83 years to the week after the hotel opened — that city officials ordered that the building must come down. After numerous efforts to save the hotel in her last days, she eventually fell.

Is it possible that the San Carlos could still be standing had stronger historic preservation rules been in place? Perhaps. Since its demolition, numerous Pensacola landmarks like the seven-story Blount Building, the Thiesen Building, and many other 19th and early 20th century structures have been saved from the wrecking ball and restored thanks to efforts by entrepreneurs and progressive historic preservation guidelines.

Today, the vacant, mold-plagued $10 million federal courthouse now sits on the site of the hotel as it awaits repairs at more than three times its original cost. A curse put on the site after the San Carlos’ destruction? Only the Gray Lady knows.

Stayed tuned for the next article in our series on the history of the San Carlos Hotel.