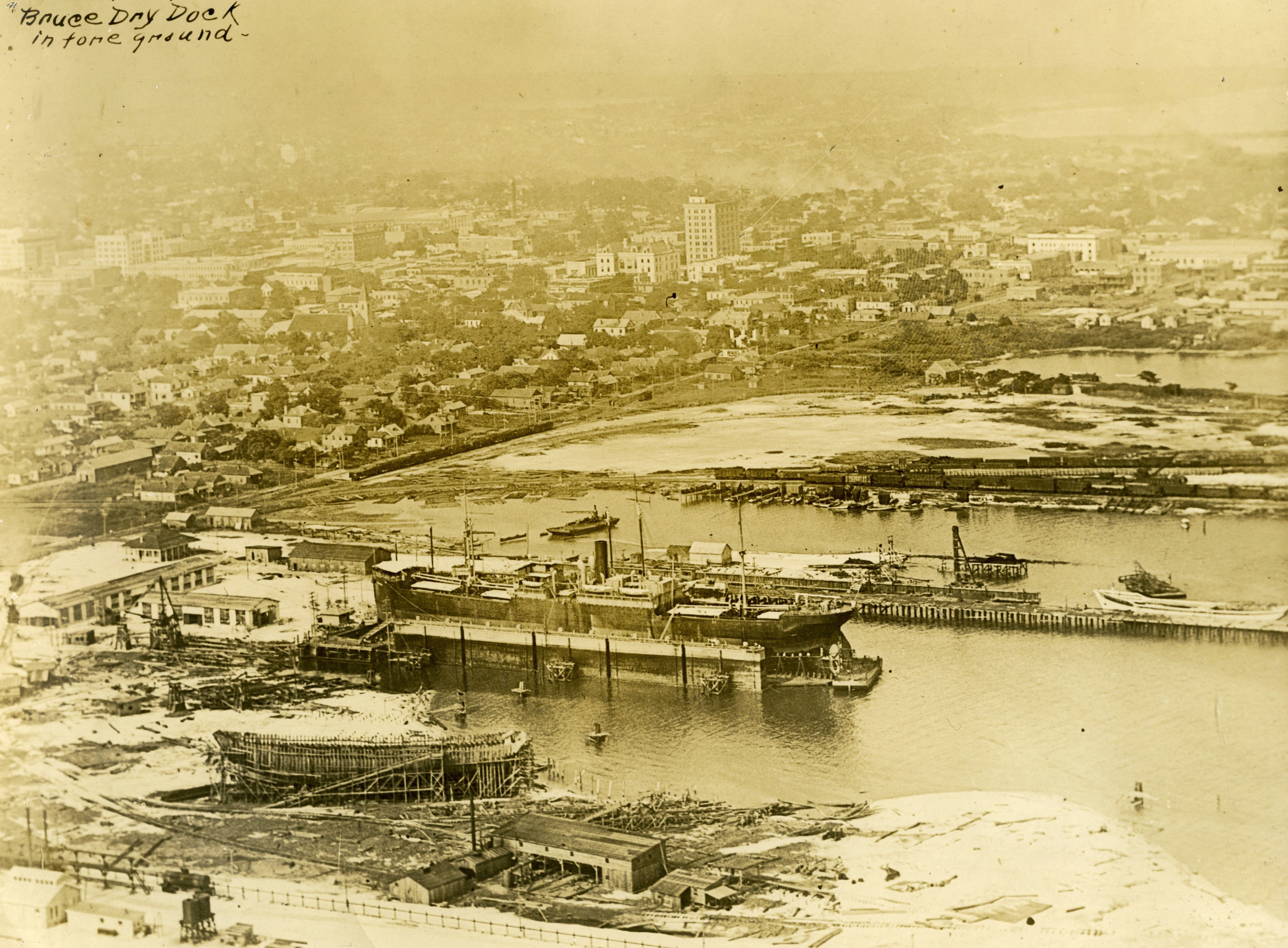 As a waterfront property in downtown Pensacola that has sat vacant for decades prepares to undergo a multi-million dollar restoration, we take a look back at the diverse history of Bruce Beach.

Bruce Beach, a 10-acre property along Pensacola Bay in downtown Pensacola, has sat vacant for a half-century, fading into memory as it’s been overtaken by decades of neglect.

Once a thriving industrial hub serving the early 20th-century maritime industry — and later a celebrated neighborhood gathering place for Pensacola’s black community — until recently, it has been all but forgotten.

Today, the future is looking much brighter for Bruce Beach, as a multi-million redevelopment and restoration project prepares to finally get underway, restoring much of the waterfront area and surrounding ecosystem.

By 2020, the public property is set to be the site of the $19 million Gulf Coast Marine Fisheries Hatchery, home to the Florida Fish and Wildlife Conservation Commission’s flagship research lab and public education center. The project is being entirely funded from civil penalties awarded to the State of Florida in the wake of the 2010 Deepwater Horizon oil spill.

Additionally, the project will provide funding for the restoration of the man-made waterfront area that is flanked by the Community Maritime Park development and an industrial oil tank farm. The development aims to fully restore the environment surrounding the waterfront property, provide public access from the Maritime Park, and will showcase the history and culture of the property and Tanyard neighborhood through a collaboration with the University of West Florida Historic Trust’s Maritime Heritage Trail.

For much of Pensacola’s early history, the downtown waterfront along Pensacola Bay was the city’s industrial heart. The site of Bruce Beach was a large part of the maritime industry in Pensacola beginning in the first decade of the 20th century.

Prior to the lumber boom of the late 19th century, however, the site of Bruce Beach likely did not exist. According to archaeologists, the site did not appear on any surveys or maps of the time. It’s likely the waterfront property as it exists today was man-made as a result of dredging operations at the turn-of-the-century.

The establishment of railroads in western Florida opened up the timber and Naval stores industries, allowing ships from foreign ports to pour into Pensacola. The building boom of the 1880s and 1890s transformed Pensacola from an isolated frontier town into an industrialized, regional trade center and port.

While the boom of the late nineteenth century resulted in an explosion of new construction, the boom also changed the geography of Pensacola. As a result of ballast storage and dumping along the old shoreline, a new shoreline and wharves were created south of Main Street, creating the present-day shoreline of Bruce Beach.

In the last decade of the 19th century, the Oliver Bronnum Planing Mill and Henry King Planing Mill were built along the Main Street waterfront near the current site. The mills were likely the first developments at what would become the Bruce Beach property. The facilities planed timbers and boards that were to be exported from Pensacola to locations around the world. After hurricanes decimated Pensacola in 1896 and 1906, both mills had been destroyed and ceased operations.

By 1916, the Bruce Drydock Company was established on the property and would operate until the outbreak of World War II in 1941. The drydock company relocated to Pensacola’s downtown waterfront in 1916, dredging the channel to provide access for massive ships. For 25 years, the company serviced and repaired ships that would later serve in World War II.

According to the Pensacola Journal in 1917, approximately 250,000 cubic feet of sand was removed from the proposed channel area and the dredging process created several acres of land that largely still exists today.

After sitting idle for more than a decade, the Bruce property would see new life beginning in the 1950s, becoming a cherished public place that black Pensacolians would seek refuge for relaxation and recreation.

From the early 1950s through 1975, Bruce Beach was a neighborhood gathering place and was once home to the city’s only municipal pool. During the era of segregation, the area was frequented by Pensacola’s black citizens, who were prohibited from enjoying most other public beaches and recreation facilities throughout the city as a result of the racist, government-imposed Jim Crow laws that were in effect for much of the 20th century. By 1956 — with money raised within the black community — Bruce Pool was built at the site.

Once home to one of the largest industrial drydocks on the Gulf Coast, the waterfront had by then become littered with dangers, such as toxic creosote pilings, sunken debris, and massive dropoffs just a few feet from the shoreline caused by dredging.

The pool, however, provided refuge for the people of color who lived in Pensacola’s Tanyard, Belmont-Devilliers, and Eastside neighborhoods. It also provided safety against the dangers of swimming in the polluted and treacherous waters of Pensacola Bay.

For many black Pensacolians, Bruce Pool was where they first learned to swim. Generations of residents visited the pool during the decades it was open, teaching their sons and daughters how to swim.

“It was the place for summer socializing for teenagers,” Delores Redmond said in 2014.

Redmond, a lifelong Tanyard resident, moved to her residence on West Zaragoza Street across from Bruce Beach in 1952. Although Redmond said she never learned to swim herself, she took her children to and retrieved them from the pool on many occasions.

Redmond stated that the 1970s expansion of the Main Street Wastewater Treatment Plant resulted in the razing of many homes in the Tanyard, undermined the community, and eventually resulted in the closing of Bruce Beach and pool.

“It was a place where we went to be with our friends all summer,” Bernadette Caine, Redmond’s daughter, said.

Caine, now a resident of Georgia, grew up on West Zaragoza Street, frequenting the pool up until its closure 1970s. She recalled very few incidents of racial tensions at the pool during the Civil Rights movement and recalled small rallies held at Bruce Beach as a place of congregation for the community.

Throughout its operation, however, Bruce Pool’s future was never certain. By the early 1970s, the city considered closing the popular pool due to what was explained as “rising costs.” Eventually, with the expansion of the Main Street sewage plan, the pool would see its last swimmers in the summer of 1975, closing a chapter for Pensacola’s black community.

The pool would sit bone dry for years, eventually being filled in with dirt. Even today, the pool remains, buried beneath a mountain of debris and fill dirt dumped on the site from the construction of the Community Maritime Park.

Soon — after a half-century of neglect — Bruce Beach may be finally restored, allowing Pensacolians to once again enjoy the access to their waterfront.