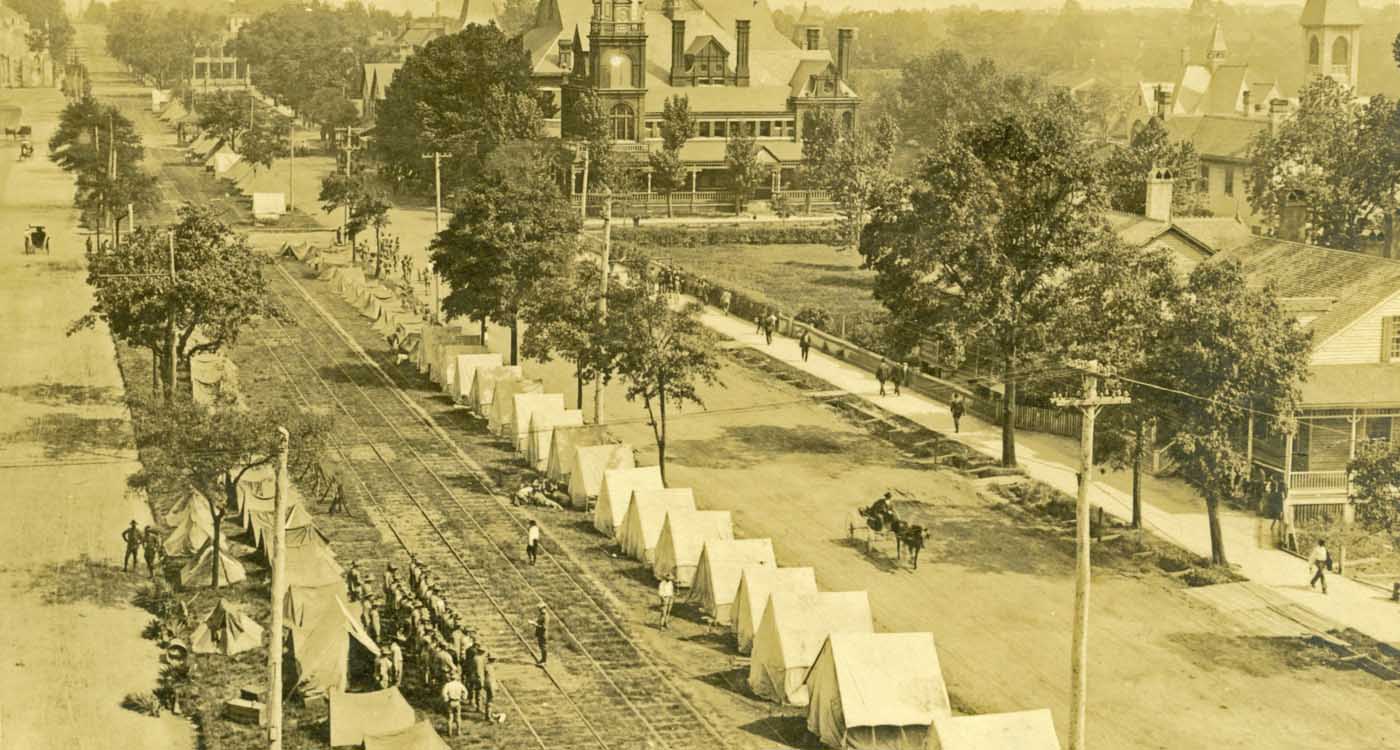 This week in 1908, workers from Pensacola’s streetcar system went on strike, sparking a month-long ordeal which rocked the city. Martial law was declared and the state militia was called in amid escalating violence between striking workers and out-of-town strikebreakers. By the time the strike ended more than a month later, several people had been shot, streetcars had been bombed, and dozens of people had been arrested.

In the days before buses and cars were in wide use, streetcars were how many Pensacolians got around town. At the height of Pensacola’s streetcar system, dozens of miles of track stretched from Fort Barrancas and the Pensacola Navy Yard to East Pensacola Heights, carrying more than four million people each year between the city’s neighborhoods. Portions of the streetcar tracks are still visible in some places, including West De Soto Street in North Hill.

But with the rise of America’s car culture and the onset of the Great Depression, streetcar systems across America began to be replaced with buses, and Pensacola was no exception. After nearly a half-century of operation, Pensacola’s last streetcar ran in 1932.

Under Leadley, friction arose between company management and streetcar workers over pay and company policies, including a rule which required suspended employees to report to the company’s car barn three times a day for a “roll call.” Employees said the rule was meant to prevent them from earning other income while suspended; the company contended that the rule was needed to discourage those who might intentionally get themselves suspended in order to get a day off.

In response, Pensacola’s streetcar motormen and conductors formed a union in January 1908, joining the Amalgamated Association of Street Railway Employees of America — a forerunner of today’s Amalgamated Transit Union, to which ECAT drivers still belong.

On April 4, 1908, union president G.C. McCain was fired by the company, and union members voted the next day to go on strike.

On Monday, April 6, striking workers led by McCain boarded a Bayshore Line streetcar returning from Fort Barrancas, seizing control of the car from company agents. The strikers let the car’s passengers off and then returned the streetcar to the company’s car barn, disrupting service for the rest of the day.

In response, Pensacola mayor C.C. Goodman demanded that the company restore service to all streetcar lines in accordance with the terms of its city franchise, a move which prompted the company to begin hiring strikebreakers to replace the striking motormen and conductors. After a search for local men willing to break the strike came up empty, the company began bringing in strikebreakers from northern cities like New York.

When the first out-of-town strikebreakers arrived in Pensacola on April 10, violence erupted between the out-of-town men, striking workers, and union sympathizers. The melee prompted Mayor Goodman to issue an order declaring the city’s saloons closed until further notice, prohibiting public gatherings, and establishing a curfew. Florida governor Napoleon Broward ordered state militia troops into Pensacola to maintain law and order and provide security for company strikebreakers. By April 14, the company was able to restore limited service was restored on two streetcar lines.

The presence of more than five hundred state militia troops didn’t put curb the strike’s violence, however. Strikebreaker-operated cars were routinely pelted with rocks and even bricks. On April 21, someone shot at a streetcar on the West Hill (Belmont-Devilliers) line, mortally wounding the car’s strikebreaker conductor. A passenger also narrowly escaped a gunshot. Two strikers were arrested in connection with the shooting but were later released.

The violence wasn’t limited to the striking workers, however. On April 27, strikebreaker Charles Burr was convicted in municipal court of having discharged a firearm during a scuffle on April 14.

On the morning of May 3, a streetcar trestle crossing Bayou Chico was set on fire. Three strikers, including the union president McCain, were charged with the crime. Their trial, held later that month, was of such public interest that transcripts of court testimony were printed verbatim in the Pensacola Journal. John Johnson, a witness who placed the three men at the scene of the crime, claimed that he was threatened and shot at as a result of his decision to testify. The three men each produced alibis, but were convicted and sentenced to sixty days in jail.

On May 11, a streetcar on the East Hill line was dynamited, though no passengers were aboard and the two strikebreakers operating the car escaped without injury. The explosion, which occurred near Wright and Alcaniz streets, “was heard in every section of the city,” wrote the Pensacola Journal. “The iron car wheels were crushed, while the flooring of the car was forced up for about six inches. The car was hurled from the track.”

Public support for the striking workers was initially strong, with local businesses donating food and other supplies to the strikers and their families. Numerous fundraisers were held, with at least $500 (around $13,000 in today’s dollars) being donated to the strikers.

Twenty-four Pensacola police officers refused orders to board streetcars and protect strikebreakers, arguing that their presence on cars would be seen as support for what they called the company’s “effort to destroy organized labor and crush the union of their late employees.” The officers were suspended and later fired.

In solidarity with the strikers, civilian employees of the Pensacola Navy Yard began using boats to get to work, boycotting the Bayshore streetcar line. In early May, however, the yard’s commandant issued an order prohibiting such boats from landing, forcing yard employees to use the Bayshore line.

By May, the strikers’ public support had begun to erode amid the escalating violence and continued disruption to the city. On May 11, with the company showing no signs of relenting, some sixteen of the strikers capitulated. The men were offered their jobs back on the condition that the leave their union, never join a union again, and sign a statement saying that the strike had been unjustified, which was published the following day in the Pensacola Journal.

After another streetcar was nearly but unsuccessfully dynamited on May 13, the remaining strikers ended the strike, but were not offered their jobs back. Though unsuccessful, the strike ultimately boosted pro-union sentiment in Pensacola, and union-endorsed candidates scored large victories in the city’s May 1908 elections.